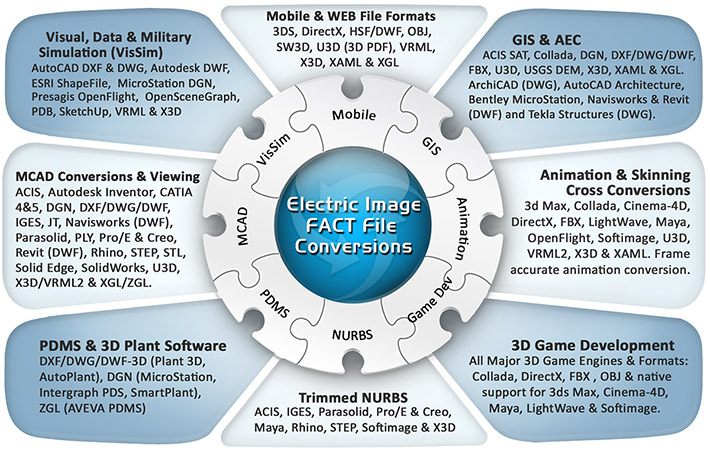 Click for larger image.
Note: some conversion paths shown in this image are uni-directional only.

You may also want to consider using Okino's FBX exporter to convert scenes over to EIAS, including skinning and animation data which is not possible via the FACT file format. It is also possible to convert scenes with texture maps into EIAS using the Wavefront OBJ file format but OBJ does not support hierarchy, lights, cameras, animation, meta data or mesh skinning.

The converter first takes the vectors from NuGraf/PolyTrans and creates a coordinate system. It also uses the magnitude of these vectors to determine the width, height and depth of the texture projection. It then calculates rotations and translations from a matrix representing the coordinate system of the projection. Using all of this information plus information about the bitmap being applied, the exporter is able to convert between these different representations of the same projection system.

Due to the nature of the FACT format, it is difficult to handle UV coordinates. The file format itself allows the output of UV information but there is no way for the file to specify that mesh objects should use the UV data for texture mapping by default (in other words, Electric Image will not use the UV texture mapping data by default, even though it is within the FACT file). This the exporter will export an object with texture UV's and also a default spherical texture projection associated with the textures.

Consider the following model to be exported from PolyTrans/NuGraf. It is a simple polygon cube with a texture map applied to it using uv coordinates. This is an image of the cube as rendered with Okino's NuGraf software.

This action will bring up a dialog for the cube object. Now click on the "Shading" tab. In the lower right portion of this panel there should be an option entitled "Use UV Space". Select this option to enable UV coordinates for texturing. This process must be repeated for each texture mapped object in the scene.

If you were to re-render the cube within Electric Image then the following image (shown on the right) would appear. This is the same mapping as the original box we exported and proves that UV texture coordinates can be successfully exported to the FACT file format and to Electric Image.

The following information explains the various options on the dialog box:

If this checkbox is enabled (checkmarked) then a MacBinary header will be added to the front of the exported FACT file. This is necessary if the file is written on a PC machine but read into Electric Image on an old Macintosh computer. The type will be set to FACT and the creator will be set to EIAM.

If this checkbox is enabled then all Z coordinates will be negated before being output to the FACT file. This is necessary for proper coordinate system conversion.

Center All Geometry At the Origin

If this checkbox is enabled (checkmarked) then all the geometry data will be positioned so that it is centered about the origin. If disabled then the geometry will not be repositioned. The default is disabled.

If this checkbox is enabled (checkmarked) then the geometry will be repositioned so that it is sitting flush with the top of the Z plane (the horizontal plane). The default is disabled.

Scale Geometry to be no Large Than...

The following options control what is sent to the FACT file:

If this checkbox is enabled (checkmarked, which is the default) then hierarchy information will be output to the file, else the geometry will be output with no hierarchy.

If this checkbox is enabled (checkmarked, which is the default) then references to bitmap textures will be output along with the material definitions in the FACT file.

If this checkbox is enabled (checkmarked, which is the default) then materials will be output to the file.

Please refer to the FACT import converter documentation for complete documentation on which FACT file format chunks are supported.